Who doesn’t enjoy freezing cold soup in the wintertime? …after it’s reheated, of course! Another option for soup lovers who don’t want to pull out the pressure canner this season is to freeze soups. Here you’ll find how-to tips and recommendations for freezing soups successfully.

24 hours before putting soup into your freezer, drop the freezer temperature to -10°F. Once soup has frozen, hold at 0°F. If you already have a freezer that’s set to the 0°F and there’s space open in it, then freezing is more likely to be an economical choice for food preservation. If you also have airtight containers to use instead of buying new ones, then the cost is even less. 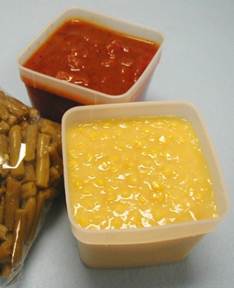 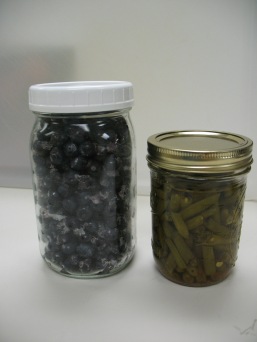 Which kinds of containers work best? Rigid containers like plastic cartons or glass jars designed for canning and freezing. Keep in mind thought that many common household containers are not suitable because you’re looking for moisture- and vapor-resistant materials that produce an airtight seal (i.e. not your average yogurt or milk container). Hint: wide-mouth jars make it easier to remove the contents before complete thawing. One other option is to pour the soup into ice cube trays!

An advantage of freezing soup is that you can portion individual servings (or servings for 2, 3, 4…), making it easy to reheat just one portion at a time in order to produce your desired quantity. No container should be so big that the soup will take a long time to become frozen; that leads to poor quality. Another benefit of freezing is that certain ingredients intensify in flavor after freezing, such as pepper, cloves, garlic, green pepper, celery seasonings and some herbs…but beware; they could also become bitter overtime. Other cautions: onion and paprika change flavor, curry develops and off-flavor and salt loses flavor. Simple solution: season lightly before freezing then add more seasonings after reheating.

Just like some fruits and vegetables freeze better than others, some soup recipes will maintain a higher quality than others. It’s generally suggested that you leave out potatoes from soups that you plan to freeze. Another tip for best quality is to concentrate the product by using less liquid. You can always add more liquid (broth, tomato juice, cream, water) when you reheat it.

After preparing your delicious soup, it’s important to cool it quickly, so that large ice crystals don’t form- that would lead to a mushy consistency. To do this, put the pot of soup in a pan or sink of ice water. When cool, package and freeze immediately, placing containers against the surfaces of the freezer for the fastest freeze. For highest quality, enjoy frozen soup within 4-6 months. 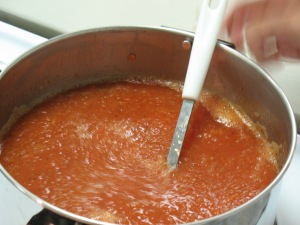 Do not put hot glass in the freezer (or in ice water); it may break. It’s also important to leave headspace so that the soup doesn’t break the container as liquids expand in the freezing process. The exact amount of headspace needed depends on the contents of your soup, but leave at least ½-inch for mostly solid soups and 1½-inches for mostly liquid soups.

Unlike other frozen foods, it is recommended that you do not thaw your soup, but rather reheat it immediately after removal from the freezer. Heat it to a rolling boil, or at least 165°F. If it’s a cream soup, then heat over boiling water, double-boiler style. Soups with dairy may curdle and separate, so stir while reheating to keep smooth. Here’s another tip: add a waxy rice or corn flour as a thickener.

Information in the entry comes from ‘Freezing Prepared Foods’ and So Easy to Preserve.

The notion of abundance seems to permeate the holiday season. In preparation for guests or as a contribution to a potluck gathering, you might prepare enough food to feed 12 or more people…and sometimes only 6 people show up, or there are so many other dishes to choose from that only small portions are taken from each dish. So then, what do you do with the leftovers?

First of all, perishable foods that have sat at room temperature (higher than 40°F) for over two hours need to be discarded. It’s also handy to note a few particular foods don’t generally freeze well: celery, cucumbers, parsley, radishes, and lettuce are vegetables that don’t freeze well due to water logging; mayonnaise, sour cream, milk sauces, and cream and custard fillings are likely to separate; fried foods, meringue and icings with egg whites will lose their desired consistencies.

If you plan to eat a food within three to four days, then cover that food with plastic wrap or seal it in a reusable container and refrigerate. Check that your refrigerator is set to 40°F or below.

If you don’t think that you’ll get to it in the next few days, then freeze the food at 0°F or below. For best quality, get it in the freezer sooner rather than later. Also consider portion sizes when you package food for freezing. Avoid creating such large portions that you repeatedly thaw and refreeze- thawing and refreezing leads to water loss, and therefore a drier final product.

Package foods in freezer bags or tightly sealed glass or plastic containers. You may also use butcher paper, heavy-duty aluminum foil, or plastic wrap. Regular plastic wrap will allow air to reach the food and cause it to deteriorate overtime, so wrap with multiple layers of plastic wrap and consider placing it in a rigid container as well. The material of freezer bags, glass, thick plastic, and butcher paper is impermeable to air.

If using a bag or rigid container, remember to leave enough head space for the food to expand while freezing. Adequate headspace is important so that the package doesn’t break. The actual amount of headspace required depends on the food you are freezing, but leaving one inch is most likely enough unless you are freezing a liquid, in which case leave 1½ inches.

Be sure to label packages with the name of the food and date, as color and appearance may change in the freezing process, or you might just not be able to see through the packaging.

For quickest freezing, spread the items out against the surfaces of the freezer, then rearrange packages closer together once frozen. This more rapid freezing prevents ice crystals from forming, which are likely to damage food cells. Also, freeze only about two to three pounds of food per cubic foot of freezer space. That’s the amount that can freeze within 24 hours.

Information in this entry comes from the Freezing and Food Safety Factsheet by the United States Department of Agriculture Food Safety Inspection Service, Preserving Food: Freezing Prepared Foods by The University of Georgia Cooperative Extension, and So Easy to Preserve.