Since it’s that time of year that foods may be prepared well ahead of time, then packaged and transported to be shared with family, friends, and co-workers, it seems timely to spread awareness about less-known situations that have the potential to lead to botulism: Did you know that it is possible for botulism to come from non-canned food items? As mentioned in a previous posting called “Botulism: Surprises”, botulism has been linked to other foods, including unrefrigerated salsa, baked potatoes in aluminum foil, garlic in oil, fermented fish, and honey. Following are a few true tales to provide important details and inspire caution…

In 1994, in Texas, 30 people were affected by an outbreak of botulism from restaurant dips made with baked potatoes wrapped in foil and left at room temperature (apparently for several days) prior to being used the dips. In this case, the spores of Clostridium botulinum (which are readily found in soil) survived the heating process (which is to be expected), remained moist, and were then so tightly wrapped in aluminum foil that oxygen was kept out of the packaging, creating an anaerobic environment in which the botulism toxin could form. Oil covering a food, as with garlic in oil, also creates an anaerobic environment.

Not even processing your homemade salsas but putting them in tightly sealed jars (again, an anaerobic environment) left at room temperature is a big risk. Botulism could result if the salsa is too low in acid, and other problems besides botulism could occur even in more acid salsas. Tomatoes (and figs and Asian pears) are borderline pH foods, so we see recommendations to add some acid to jars even before treating them as boiling water canned foods. Fermented fish and fermented vegetables that do not finish fermenting to a truly acidic pH are other examples of foods that might not be acidic enough to prevent the botulism-causing toxin from forming.

Another situation that has caused botulism is pickled eggs left at room temperature. In 1997, in Illinois, a 68-year-old man developed symptoms of botulism – double vision, inability to speak, difficulty breathing – that was traced back to homemade pickled eggs. Testing confirmed the presence of type B botulism toxin. To prevent the toxin from forming, pickled eggs should be stored in the refrigerator and only be at room temperature for serving time; limit their time in the temperature danger zone (40 degrees F to 140 degrees F) to no more than 2 hours. Pickled egg recipes and storage guidelines can be found on the NCHFP website.

Early in 2011, two people got botulism from eating commercially made potato soup intended for refrigerator storage but kept in their homes at room temperature.  One case was in Georgia and one in Ohio.  Both people bought the soups from a refrigerator case, left them out of the refrigerator at home for a long time and then tasted them.  Bad decision!  Each individual spent a long time in the hospital and then were transferred to rehab facilities with respiratory issues. Unfortunately we do not know the ultimate outcome today.

It may now seem like botulism can come from anywhere, but that’s not true; Clostridium botulinum bacteria require specific conditions to be able to grow and produce the botulism-causing toxin. Understanding what’s involved in the formation of the toxin will help you know how to prevent it:

In order to grow and produce the botulism-causing toxin, C. botulinum bacteria must be kept in a very low-oxygen (anaerobic) environment with a pH above 4.6 (low acid foods) and a relatively high moisture content.  If these conditions are met, any temperatures in a wide range around anyone’s “room temperature” and definitely above 40 degrees F will allow the bacteria to multiply and produce toxin.  (Sometimes the temperature even can be a little cooler than that for some types of C. botulinum and they will still multiply.) 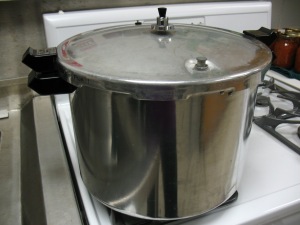 Awareness and action is the key to prevention. To avoid botulism, avoid the risk of containing C. botulinum in a low acid, moist, anaerobic environment and if you do so (you canners out there know who you are), then be sure to process your low-acid food products in a canner equivalent to at least 240 degrees F (achieved when your pressure canner reaches the recommend amount of pressure, after venting, for your altitude) for the recommended amount of time.

Click here to view the full article of ‘Foodborne Botulism From Eating Home-Pickled Eggs —Illinois, 1997‘ from the Centers for Disease Control and Prevention. Here is the full publication ‘A Large Outbreak of Botulism: The Hazardous Baked Potato‘.  And here is the short story of botulism from potato soups in 2011.