A frequent question lately has been about re-using that leftover pickling brine when making homemade quick pickles.

Sometimes quick pickles are made by heating cut 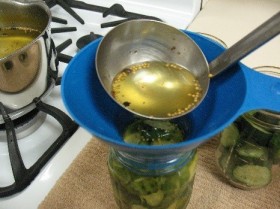 or sliced vegetables in a vinegar solution to acidify them. If this is done prior to filling jars, we refer to that as a hot pack method for canning: heating vegetables in the pickling liquid before filling them into your jars and covering with the hot liquid. Other times, quick pickles are made by the raw pack for canning: prepared raw vegetables are placed directly into the jars and then the hot pickling liquid is filled over them into the jars.

Once you heat, or even soak, your vegetables in your pickling solution, pH changes start to happen. (Heating makes the interaction happen faster.) The vegetables become more acidic, which is what we want to happen in pickling. However, the pickling solution then becomes less acidic. So if your recipe is a hot pack for canned pickles, and you have heated your vegetables in the pickling solution (“brine”), then you should not use leftover brine from filling jars for another round of the recipe. The expected ratio of acid to low-acid ingredients and ultimate pH adjustment in the next recipe will not be the same.

If you are making a usual raw-pack recipe for canned pickles and have leftover vinegar or pickling solution, then that could be used for another round of the recipe if you have a significant amount left over. An example of this type of raw pack would be pickled dill green beans, or quick dill cucumber pickles. The beans or cucumbers are never combined with the vinegar solution until it is filled over them in the canning jars.  The initial boiling may have concentrated the vinegar (and other ingredients like salt or sugar) just a little, but that does not make it less safe.  If you boiled it quite a bit to concentrate the mixture, you may not want to use it for its effect on flavor, however.

In some recipes, sliced raw cucumbers are soaked for hours in the pickling liquid (vinegar, sugar and/or salt, for example). Then the liquid is drained off the cucumber slices into a pan. The soaked raw slices are filled into jars while the liquid is then heated and poured over them. Even though this is a raw pack in terms of filling jars, this vinegar solution had its original pH (acidity) altered from that initial soaking before it was heated and poured into jars. It should not be used again for a canned pickle recipe since it is now of unknown acidity.

Leftover solutions from preparing a canning recipe could be used to flavor some veggies that only get stored in the refrigerator. This would be similar to marinating for flavor. Not knowing each recipe and situation, I cannot give you a definite storage time for this new mixture in your refrigerator.  I would treat it as a fresh vegetable salad and consumer it within several days in most cases.  And remember, home refrigerators should keep foods at 40 degrees F or lower!

Unfortunately some of our “legacy” USDA pickling recipes, as well as those from other sources, and especially those using whole pickling cucumbers, do result in some leftover brine after filling jars. Different varieties of pickling cucumbers have varying diameters and lengths and will not always fit into canning jars to the same degree. Therefore, there are more uncertainty and variable results in issuing recommendations for general use.

Do realize that the safety of pickle recipes for home canning in boiling water will depend a great deal on the ratio of ingredients and preparation steps including piece size. And not all pickle recipes produce the same final, equilibrated, pH in the vegetable and brine. Even though safe for boiling water processing, the length of the process time needed for keeping them on the shelf at room temperature can vary depending on the actual acidity.

Our Pickled Products recommendations for home canning can be found at the National Center for Home Food Preservation website or in So Easy to Preserve, 6th edition, from the University of Georgia. The University of Georgia Extension also has two factsheets that can be downloaded for free, Pickled Products and Canning Relishes. Please be safe in choosing your pickling recipes for canning!

Sometimes new is better than the tried and true older version of something.

We took a look at

the long-standing original Orange Marmalade procedure in the University of Georgia’s So Easy to Preserve book and decided to make it easier (and better?). The book version has a 12 to 18 hour standing period of the fruit and water ingredients before continuing with adding sugar and cooking. We found this wait to be unnecessary in affecting

the outcome of the final product so we were able to shorten the procedure. Also, the book directions have you measure the fruit and water volume in cups after this standing period and then calculate the amount of sugar to add. That was a bit messy (and dirtied more dishes to wash!), so after some repetitions to figure out a specific amount of sugar to use with each batch, we eliminated that step, too!

Of course this will not get changed in the book until there is a new edition (a totally unknown date at this time, by the way) but our National Center for Home Food Preservation website makes it possible to bring it to you right away. The recipe is posted here: http://nchfp.uga.edu/how/can_07/orange_marmalade.html. We used navel oranges in our recipe development, and left all of the white albedo attached. See notes at the bottom of the recipe page.

This is still a traditionally very sweet marmalade that gels from correct cooking with the right proportions of sugar and pectin as well as acid. It is partially preserved for the recommended short canning procedure by the sugar content as well as acidic fruit, also. We recommend cutting the orange peel into very thin strips; it is “chock-full” of orange peel. However, the sweetness makes it not too bitter. (I will admit, I have never been a marmalade fan, but I do really like this one!)

The pectin comes from the citrus fruit albedo (the white pith or tissue right under the outer peel) that is included. As with all cooked jams, jellies or marmalades that gel without added purchased pectin, but only with the pectin found in the fruit, cooking to the right temperature for gelling will be a little variable depending on your actual fruit and pectin content, speed of boiling and size of cooking pot. Our yield is usually just the 7 half-pint jars or in one batch, at least another partial jar. It is important not to overcook, also, or you pass the point where the pectin will gel.

Brush up on your measurement of determining “doneness” if you need to! Temperature might work well with this one, or get a small glass plate cold in the freezer while you cook. When you are ready to test for doneness, take the plate out and drop a few drops of the marmalade onto the cold surface. It should hold its shape pretty well. If you use the Spoon Test, be sure you are capturing the jelly part of the marmalade on your spoon and not fruit or peel. You have to work  quickly with all these, and take the pan off your burner. You don’t want to overcook, either, and get a marmalade that is too stiff or gummy. This stage makes these methods a little less precise than cooking jams or marmalades with added pectin, but also makes them more special as you work to perfect your product!

If marmalade is something that can help brighten your morning or other meals with a little addition of flavor and color, enjoy!